Last month, Jen Barr posted a BBC column on our Facebook page about pedestrian rules in Britain. The gist of the article was that, while the British government has 35 rules for pedestrians, nobody follows them and they aren’t enforced. Having visited London, I wasn’t surprised. Strict enforcement of pedestrian rules doesn’t have much of a chance in a city with such a high percentage of visitors and newcomers. But I thought it might be interesting to look at the rules, especially since I would be going to London again for my vacation this summer.

In fact, the British pedestrian rules, though detailed, are written more like safety guidelines. The “Green Cross Code,” rule #7 of the 35, carefully explains how to cross the street, starting with finding a safe place to cross. Here’s the illustration: 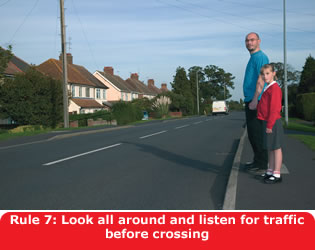 The code states that if there is a crossing nearby, you should use it, and that it is safer to use an official or controlled crossing. But then it says “Otherwise choose a place where you can see clearly in all directions…” and “where drivers and riders can see you clearly.” In other words, mid-block crossing is not the preferred location, but it’s not illegal, and here’s how to do it safely. Specific directions are given for different situations. For example, while Rule #7 says “try to avoid crossing between parked cars”, Rule #14 explains what to do “If you have to cross between parked vehicles.”

Although the Green Cross Code is presumably taught to UK citizens of school age, communicating the expected behavior to people who have recently arrived is not easy. Most of the crossings in London have push-button activated signals, but many pedestrians cross whenever they see a gap. Fortunately, traffic is usually moving slowly enough to stop.

Slow speed of traffic is, of course, a major key to pedestrian safety. A campaign to lower the speed limit to 20 mph (from 30 mph) has been spreading across London’s many boroughs over the past few years.  In July, the 20 mph rule was applied to most streets in the City of London, a square mile in the heart of Greater London.

I have to admit that a lot of the pavement markings were mysterious to me as a visitor, but the zigzag lines that are on both sides of most of the pedestrian crosswalks are very distinctive. They warn drivers that a crossing is ahead and, as a bonus, parking is forbidden on the zigzag lines as well as on the crosswalk itself. This helps improve visibility.

My favorite thing about the pedestrian network in Britain is the prevalence of medians. The British manage to squeeze in medians on many of the two-way roads, even if they are relatively narrow by our standards. With the medians, it’s easier to make a two-stage crossing, waiting in the middle for traffic from the other direction. The medians tend to be small, but many of them are lit at night, which improves night time visibility. 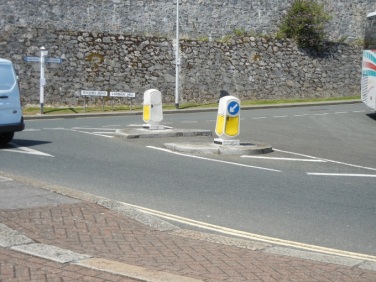